Bollinger Discovered A Secret Room Filled With Vintage Champagne, Will Auction One Bottle In NYC 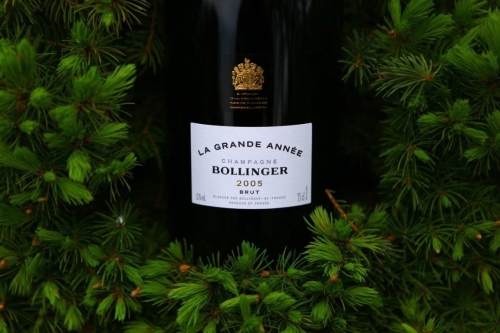 Do you get a little giddy after pulling a winter coat out of storage and finding a $20 bill in the pocket? Imagine, then, the thrill of discovering a hidden chamber filled with over 600 bottles and magnums of pre-WWII reserve wine for Bollinger Champagne. In the summer of 2010, that’s precisely what happened at this Champagne house in Aÿ. In fact, an intern had been sent to the subterranean tunnels of the property’s cellar to clean. During the process of removing a wall of empty bottles, another wall sealing off an abandoned chamber was discovered. Inside were the personal wine collections of past family members dating back to 1830. Bollinger was founded in 1829.

Through rigorous tasting and analysis, the wines were verified and identified. In 2012, under the guidance of Cellar Master Gilles Descôtes, a restoration project was started to save the rare bottles. All of the wines will remain in the Bollinger Wine Libraries with the exception of one. And that one bottle, comprising Lot 40, is the showpiece of Bollinger’s first ever auction, hosted by Sotheby’s in New York City on November 19, 2016.

Presented by the auction house as “A Century of Champagne Bollinger,” the event will feature a selection of rare wines that have never before left the winery’s cellars in Aÿ, France. In other words, the wines have perfect provenance. The sale is a milestone for the legacy Champagne house, known for its uniquely complex and powerful, yet sophisticated style. Since its founding, Bollinger remains one of the last independent family houses. Other notable achievements: Bollinger’s elegance seduced the Crown of England into awarding it the prestigious Royal Warrant in 1884; and for more than 40 years, Bollinger has served as the Champagne of choice of James Bond.

Bollinger CEO Jérôme Philipon commented: “For the first-ever auction of Champagne Bollinger in the U.S., we are extremely proud to have Sotheby’s as our partner. Not only will we unveil an incredible depth of vintages this November, but we will also demonstrate the unique capacity of Bollinger Champagnes to age. We are thrilled to connect directly with our American customers with these gems from our cellars.” 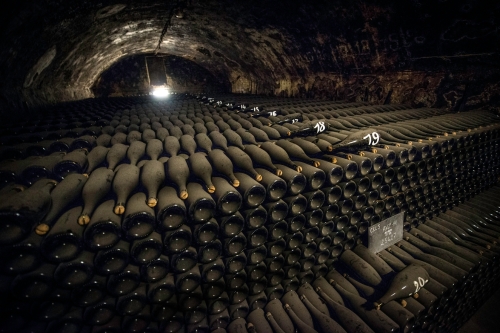 An intern found a hidden stock of Bollinger reserve wine in a forgotten room in the cellar. (Photo provided by Bollinger Champagne)

The auction highlight, Lot 40, will include the historical 1914 vintage, packaged as “The Bollinger 1914 Experience.” The lucky buyer won’t actually take the wine home or transfer it to a remote, high-security facility. Rather, he or she will savor it at the winery, accompanied by three new best friends. The package will be sold as a once-in-a-lifetime opportunity for four people to taste the 100+ year vintage as part of a private visit to Galerie 1829 at Bollinger. The lot also includes vineyard and winery visits; dinner with Bollinger Champagnes at the two-star Michelin restaurant Le Parc at Les Crayères, hosted by Philipon; and accommodation at Le Château Les Crayères in Reims.

If Lot 40 eludes you — after all, there can only be one winner — other highlights of the sale include:

Serena Sutcliffe MW, Honorary Chairman at Sotheby’s Wine, advised potential bidders: “if you plan to buy vintages to keep for important anniversaries and family milestones, remember to stock up on show-stopping ‘grands formats.’” She had the pleasure of tasting through Jeroboams down to bottles, and noted that not only did the larger formats maintain their freshness and youthfulness, but they retained more pressure and thus effervescence. And I’ll add one more comment to that: they look spectacular when served. So, when you have the choice of a Jeroboam, take it.

8 responses to “Bollinger Discovered A Secret Room Filled With Vintage Champagne, Will Auction One Bottle In NYC”