A short drive from the famous village of Montefalco is a narrow, half-paved road hugging a vine-covered hill. Driving my Nissan Jr., I followed this modest path around the base of the knoll until it swung around to greet two large gates offering admittance to the gleaming, modern Arnaldo Caprai winery.

In the parking lot, I am intercepted by a smiling, seemingly easy-going guy who introduces himself as Marco. Yes, that Marco Caprai, son of the founder Arnaldo, now head of the recently awarded European Winery of the Year by Wine Enthusiast. His flight to NYC had been cancelled due to Hurricane Sandy (as mine would be 2 days later), so he was now in town to give me a personal tour, tasting, and later, a lovely lunch back in Bevagna.

A little background on Marco: He is dogged in his love for his grape and Umbria, yet is a benign and genuine salesman of Sagrantino. He travels regularly to NYC, California and Europe with the sincere ambition of achieving recognition for the region, and putting this little known variety on the international vinous map. Marco has also spearheaded the region’s sustainable viticulture movement through the founding of “Montefalco 2015: The New Green Revolution” in 2010.

Marco is well-known around town, although I get the feeling everyone knows everybody in these quaint villages.  Later, over lunch and two bottles of wine, he proclaimed himself to be a “naughty boy,” stated with what I interpreted as mischief in his eye. I didn’t stick around Umbria long enough to find out what that meant, but I could imagine Marco as the go-to guy if one was looking for a boisterous time in this sleepy hamlet.

The first activity on the day’s agenda involved piling into the winery’s rehabbed Land Rover (I love these cars for their reminder of Africa) to take a drive up through the vineyards. Arnaldo Caprai is a leader in the area for viticulture research, having launched the Sagrantino Project with the University of Milan to study, quite obviously, Sagrantino. They use the experimental plantings to examine clonal selection, trellis systems and various other vineyard variables that affect the wine in your glass.

A drive through the vines affords remarkable views of the area and a chance to enjoy the crimson Sagrantino leaves that change color each fall with the weather.  Marco told me the leaves were only beginning to turn, and that in late November the region would be awash in rolling rows of red.

Back inside the winery, I am given a brief tour of their facilities. As opposed to many traditionalists in the area, Marco believes in modern winemaking for taming the unruly Sagrantino grape without repressing its spirit, and he has the latest equipment to prove it. After, we head to the tasting room to sip and spit—the downfall of driving yourself—through their line-up. 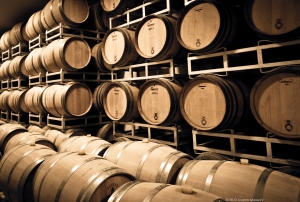 Without going into notes on all of them, I will say I enjoyed the Grecante 2011 for its delicate florals, white grape juice and apple-citrus notes—a change of pace from the region’s robust reds.

Of course, the showstoppers were the Sagrantinos. The Collepiano offered intense concentrated red and black fruit, spice and youthful tannins, but proved to be a junior version of the enormous 25 Anni Sagrantino.  The 25 Anni, first bottled in celebration of the winery’s jubilee in 1993, is produced from the best grapes, sees longer maceration and barrel time, and is a mammoth wine. Both of these bottles will bring joy to their imbibers but should be held for at least another 4 years; longer for the Anni, if you can stand it.

From high-tech, we head to traditional winemaking and Milziade Antano next…

Don’t be fooled by the pretty bottle, this wine is mammoth!