This modest little winery outside of Bevagna is…Sorry, that was a different outfit.

Tenuta Castelbuono keeps up the reputation of the region for inducing gawking while driving and near constant car wrecks. I couldn’t believe this piece of sculpture, architecture as well as functioning winery could be so neatly tucked amongst the Umbrian hills; both obvious and hidden at the same time. Having seen the photos before arrival, I knew what to look for, but in person the property was a marvel. Despite the rolling dark clouds and rainy state of the sky, the winery, designed to resemble a turtle shell, shimmered both inside and out.

I have been to many wineries around the world but the “carapace” is perhaps the most stunning and unique. Yet I was concerned that with all the money spent on the winery, the wines might not deserve the shrine. You would be surprised how often this actually happens—how do you forget about the wine, people???

So who built this temple to Sagrantino? The Lunelli family (of Ferrari sparkling wine soon-to-be-fame-in-the-U.S.) acquired the land in 2001. They were looking to expand beyond the Dolomites of their home region, and fell in love with the distinctive character of Umbria and her unique grape. This would be their third winery project, having established a winery in Tuscany a few years prior.

Their arrival in 2001 meant the Lunellis were fairly new to the region, yet Sagrantino di Montefalco was granted DOCG status in 1992, and only a small group of winemakers had been making serious dry wines since the ’70s.  In fact, the region has seen a great deal of growth over the last few years as awareness and popularity of Sagrantino has grown.

Establishing the winery took a number of years, both in the vineyard and in the creation of the physical structure. As far as building an homage to the tortoise, that decision came from the renowned sculptor Arnaldo Pomodoro whom the Lunellis engaged to design it.

When asked about his inspiration for the property, Pomodoro explained: “The landscape reminded me of Montefeltro, where I was born, a region painted by Piero della Francesca in his works. Therefore, my work must not disturb the gentle hills and vineyards, but it needed to integrate with them. I had the idea of a shape that resembles a turtle, symbol of stability and longevity. Its shell represents the union between earth and sky.”

The structure ultimately took 6 years to finish, finally opening this summer in 2012—lucky me for being one of the first tasters through the door!

Sagrantino is chock full of tannins and can be a tough grape to spend the day with. It is truly a food wine and a good Umbrian winery should offer something to nibble while tasting. Castelbuono prepares visitors a lovely plate of snacks, paired with a local olive oil made by the family of the tasting room manager Giorgia. 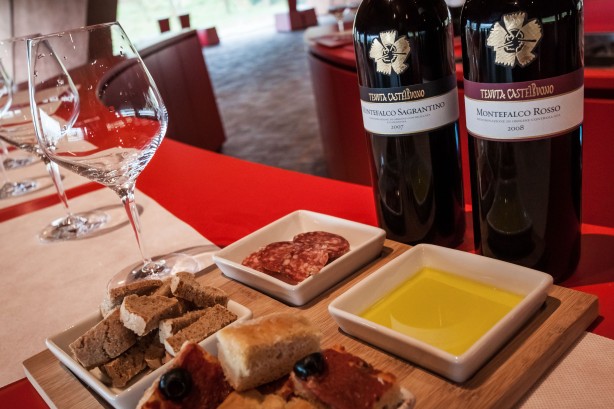 Snacks and wine at the tasting bar

Montefalco Rosso 2008: 70% Sangiovese, 15% Sagrantino, 15% blend of Merlot and Cabernet Sauvignon.  Despite being the “easiest” wines of the three, the Rosso was still a big boy, getting a tannic kick from the 15% Sagrantino, with loads of marasca cherries to coat the mouth. Aged 18 months.

Montefalco Rosso Riserva 2008: Same blend as above, but with more Cab than Merlot in that 15%.  This wine is aged for four years like the Sagrantino, and is a new addition to the line-up. Even more intense that the Rosso, this wine has impressive body, slightly smoother tannins and notes of blackberry, black and red cherry, with a nice kick of fall spice.

Montefalco Di Sagrantino 2007: 100% Sagrantino. The Big Dog. The Reason You Came. This huge wine is just getting started and really should be opened a few years down the road. If you must open now, drink with equally weighty food. Proper acidity brings balance. Mouthcoating tannins surround a core of blueberry, blackberry jam and leather. 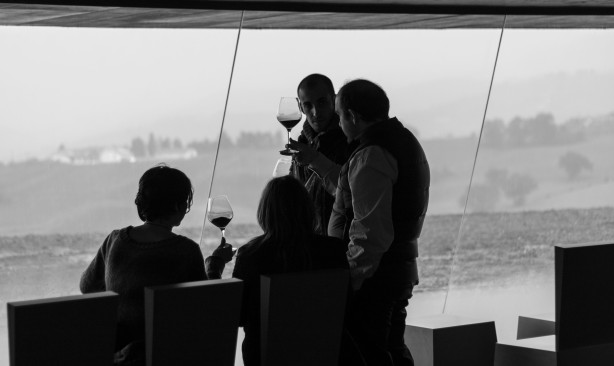 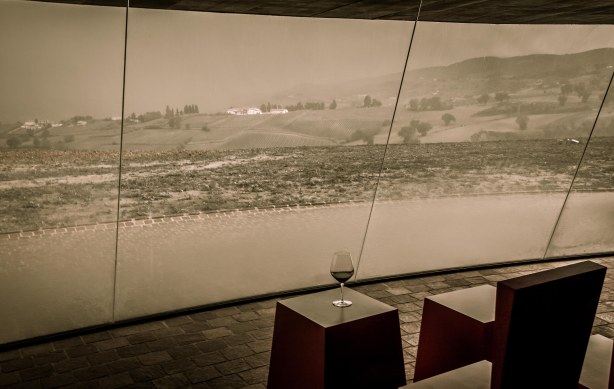 My turn to gaze

All in all, Tenuta Castelbuono proved a successful start to my Umbrian adventure. A highly recommended experience, but if you don’t have plans to hit up Umbria any time soon, you can find their wines at Eataly Vino in New York City.