Here’s Why You Should Care the Lowest pH Riesling in the World Comes From Okanagan Valley, British Columbia 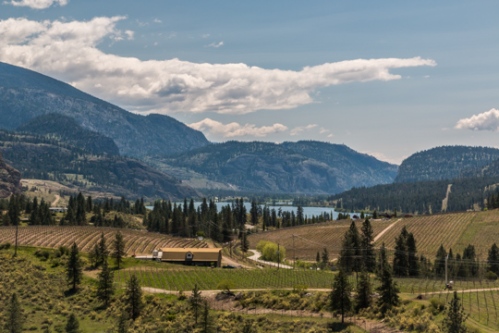 All Images by Lauren Mowery

If you missed my Village Voice column, here’s a second look…

Acid: wine needs it for balance. It makes your mouth salivate, cuts through fat and cream, keeps wines fresh, especially sweet ones, and helps them age gracefully in the bottle. But too much of it, and the drinking experience mimics sucking a tart, mouth-puckering lemon. Too little of it, and the wine tastes flabby, or flat, or even syrupy like bad, store-bought Margarita mix.

Bright, zesty wines have long been considered the provenance of the Old World. Self-proclaimed “acid freaks” who love the crackling, electric tension (myself included, to the detriment of my teeth), track regions where high-acid levels occur naturally. Chablis, Austria, Germany, and Northern Italy, for example, reliably produce laser-sharp, racy whites. But pH levels taken from a global pool of rieslings uncovered an interesting phenomenon: the semi-desert grape-growing region of the Okanagan Valley in British Columbia, Canada — the New World — delivered some of the lowest numbers ever recorded.

Acid, naturally occurring in grapes, diminishes as they ripen, especially in warm climates. The general backlash against the over-ripening of fruit, and trend towards picking earlier to create wines with “balance” (simplified: less ripeness in grapes means lower sugar levels and higher acid, which makes lower alcohol and higher acid wines) is in full-throttle, but not all growers have the luxury of retaining acid levels naturally after fermentation. Wines from hot zones like South Australia and Central California often require an addition of tartaric acid (which comes as a big bag of white powder, and gets measured and dumped in like sugar in a cake recipe).

Let’s geek out for a moment on pH. This scale from zero to fourteen measures acidity versus alkalinity. A pH of seven is neutral. The higher the number, the more alkaline or basic the substance, like root vegetables. The lower the number, the more acidic the substance is, like apples. Most white wines fall between three to four pH; reds lean a bit higher, depending on the variety.

Riesling specialist Stuart Pigott ran a story on the variety’s range of pH levels in the December 2013 issue of Wine & Spirits. The lowest pH wine he’d ever encountered in the world was “the off-dry 2012 Platinum from Cedar Creek in the Okanagan, with an astonishing pH 2.73.” He noted that “the only wines that sometimes match that figure are chardonnay base wines for Champagne, deliberately picked early to get that acid.”

You might be wondering why anyone would want to drink a wine with such a low pH if high acid levels equate to a jarring tartness. Well, sometimes you wouldn’t. Just as acid can be added to wine, it can also be removed. But the key here is balance; Okanagan rieslings have equilibrium because their fruit expressions soften sharp edges, as do the occasional, small amounts of sugar left in some wines. (Think about lemonade: the synergy of sugar and lemon juice is greater than the sum of its parts.)

While this isn’t exactly fresh news to the industry, the revelation lacked relevance to the average New York consumer because British Columbia’s wines weren’t available in our market. Until now.

Recently launched on the Wines of B.C. website, an e-commerce platform makes available select bottles from a small portfolio of boutique producers, directly to New York consumers. The selection won’t overwhelm you into indecision, but there’s enough to whet your palate. Plus, shipping costs are relatively nominal (although the wines are rather expensive).

Located a four hour drive east of Vancouver in south central British Columbia, the Okanagan Valley has around 130 producers spread across sub-regions like Kelowna, Naramata, Oliver/Osoyoos, Summerland, and the neighboring Similkameen Valley.
The Okanagan is considered the northernmost fine wine producing region in the world. (Although climate change is pushing the latitudinal reach of vitis vinifera further into Northern Europe).

The lake- and wilderness-dense countryside encompasses a stunning 125-mile swath of patchwork vineyards running south to the border with Washington State. The semi-arid desert climate provides hot, dry summers and long sunlight hours for the ripening of grapes, with cool nights helping to retain fresh acidity.

Not sold on Wines of B.C., but available in the New York market, are the rieslings of Tantalus. Winemaker David Paterson and vineyard manager Warwick Shaw are experts at transforming the grape into a transparent, piercing expression of their vineyard sites. Tense, almost quivering, lemon-lime notes snap like pop rocks above a chalky, mineral complexion.

Riesling isn’t the only grape to enjoy the favor of the climate and soils. Vivid pinot noir, chiseled syrah, savory cab franc and attractive Bordeaux blends, show promise in the red category. Available on the B.C. site, Meyer Family specializes in pinot, and Black Hills Estate and Painted Rock produce some of the region’s most serious red blends. Until more producers penetrate the competitive NYC market, however, my best advice for exploring Okanagan Valley wines: go there, and bring along a big suitcase.

This past Friday, an Australian wine importer friend came by and we decided to open wines we can’t get readily get our hands on here in NYC. I’ve stocked my wine fridge from travels abroad, so our drinking options ranged from wines like Plavac Mali smuggled out of Croatia; Furmint slogged back from Hungary; and a Roussanne from a small producer in Australia.

However, we decided to dip into the case of wine I brought back this past June from the Okanagan Valley, British Columbia. The Canadians and U.S. have a very cool alcohol import/export relationship; thus, these wines are wholesale, unavailable in the New York market, and, I think, most of the U.S. Such a shame. The Okanagan whites, in particular, the Rieslings, are outstanding. There’s also growing Pinot Noir production up-and-over there (there being the far west of Canada, but still a 5-hour drive east of Vancouver).

The Canadian government handles all wine sales; thus, I gathered my assemblage of vino at the VQA in Penticton. The shopkeeper professed intimate knowledge of the local wineries and wines, so I asked him to help me put together an all-star kit of under $30 bottles, showcasing producers and a variety of grapes. I have nine more bottles left, so I will post commentary and photos once those make their way into my glass. For now, I’ll address the three we consumed. And for you, readers, the best way to enjoy these wines is to visit the source. Between snow-dusted mountains peaks, arctic blue lakes, friendly locals and organic, local food scene, the Okanagan Valley is one of the most beautiful wine regions in the world, setting a lofty bar for the wines to reach. Fortunately, they arc high above it. 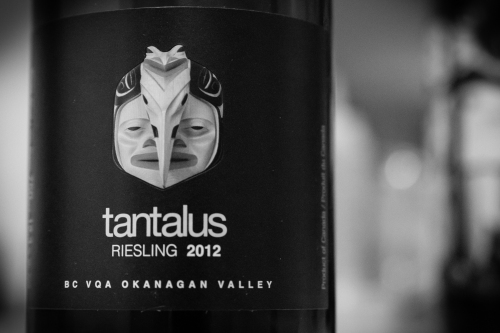 TANTALUS RIESLING 2012: YIKES. Scary delicious. Both ripe, yet nervy, full of bright, saliva-inducing acid, citrus-y lemon-lime, but plump full of tropical notes, too. Layers and layers of flavor. 2012 was a warm vintage, and maybe that shows, but there’s plenty of structure to keep this wine focused. And what, exactly, does a “warm vintage” mean in Canada, anyway? Although the Okanagan is one of the northern most winegrowing regions in the world, it’s still an arid, desert-like zone, experiencing warm to hot summers.

MOON CURSER VIOGNIER 2011: Gorgeous bottle, eh? Frankly, my photo doesn’t honor the colors nor art since it’s in black and white; the actual bottle shimmers with golden highlights as though treated to an appliqué of delicate gold leaf (see pic below). The juice inside is equally striking. Compared to 2012 (see above), 2011 was a cooler vintage, which probably helped tip this wine away from the ripeness scale, into a leaner, delicate style that’s uncharacteristic, but wonderful, for the grape. An obvious note of candied ginger pricks the tongue, followed by white peach, white flowers and a lemon-chiffon finish. 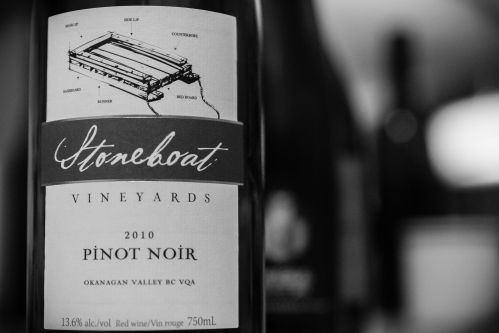 STONEBOAT VINEYARDS PINOT NOIR 2010: I wanted to love this bottle after my enchanting encounters with the first two, but the Pinot tasted just a bit too green for my palate. I can normally get behind more delicate wines–this bottle actually reminded me of a red Sancerre from the Loire I had recently–another region that struggles with Pinot Noir ripeness.  I know Stoneboat is an excellent producer, so I will give them another shot when I head back to the valley in the spring. Not all was lost, however–this wine had lovely notes of savory wet leaf, a bit of spice and earthiness, with a tea-like quality. The fruit played hide-and-seek, but when it popped out, I tasted a bit of currant, pomegranate and sour cherry. This might be to the taste of some folks out there. Interestingly, I found a number of other Okanagan Pinots swung too far on the richness scale, many of them overoaked (I heard producers are moving away from that style), so kudos to Stoneboat for not resorting to such masking measures. 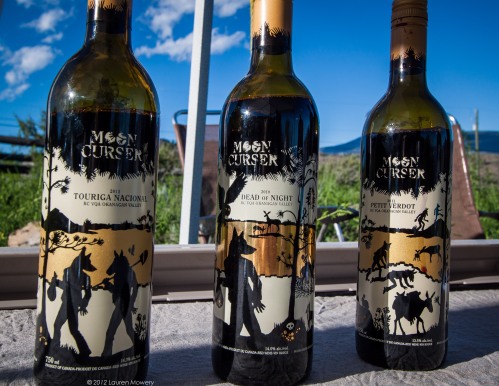 Above is a photo of Moon Curser bottles, taken this summer near the winery in Osoyoos.