Where were you born? Perth, Western Australia.

Where do you live now? Margaret River, Western Australia. I have lived in other places as well.

How did you get into the wine business? I often get asked this, and my normal response is gravity – I fell into it. My parents had a strong interest in wine, and planted a vineyard in Margaret River in the early 70’s. I finished a completely unrelated degree about the same time, and was bumming around looking for something to do (realised I didn’t want to be a phys-ed teacher once I finished the degree), so I helped them out in the vineyard and winery, and found myself interested in it. I started a correspondence degree in winemaking in 1983.

What is most and least rewarding about being a winemaker? Most–you get to take your work home with you; least–I am not an early morning person, and you frequently have to start early.

What are the challenges of making wine in your region? Margaret River has a very good climate, so compared to many other regions, there are very few challenges that present themself. However, there are more logistical challenges, like getting good staff. Certainly the distance from everything else can present challenges, as well as bringing the special Margaret River attitude.

Have Australians’ wine preferences changed in the last 10 years? Yes, like the rest of the world, we have discovered Sauv Blanc from NZ. Similarly there appears to be a desire for fresher, more fruit-oriented wines, but at the most fundamental level, most people want wines that have flavour, balance and harmony (at a good price). At that level, there has not been that much change.

Have you been to the U.S.?  Do you think Australia gets an unfair reputation in the U.S. for producing unbalanced, fruit bombs? Yes, I have been to the US. I don’t think our reputation for unbalanced fruit bomb wines is unfair, because we have made lots of wines like that. First, we have because we can (it is one of the blessings of our grape growing, in that we can and do get pronounced varietal fruit characters –it is part of our unique terroir), and second, because that was what was being rewarded by the journalists, or demanded by the public. If we are guilty of anything, it is not promoting the variety of wine styles that come from the many regions of the country. Not all red wines come from the Barossa, and not all have the characteristics of Barossa Shiraz. Margaret River is 2000 kms from the Barossa Valley, and our wines are very different.

Which wine or grape is the least understood or respected? I desperately want to say Chardonnay here, because I just don’t understand how people can say I don’t drink Chardonnay (I know this is from you–Simply. Never. Do. I. Drink. Chardonnay.) The least understood and appreciated variety of any repute, however, (avoiding all the obscure varieties that are being “rediscovered”) has to be Gewurztraminer. The wines have such distinctive aromatics, flavour, texture and personality, yet people want to drink Pinot Grigio? Explain that.

What excites you most about Australian wine right now? The fantastic run of great vintages Margaret River has had –7 and still rolling.

What do you drink when relaxing at home? Many and varied, but usually from Australia, Spain, Italy or France. I am trying to cut down on the many.

What types of food do you like to eat? I have a similarly eclectic taste with food. My preference is for someone else to cook it, and do the dishes. I am not a big fan of offal, everything else is fair game though.

What music do you listen to? I have broad tastes in music. I used to listen to a lot of jazz and contemporary types of music. However, as I have aged, I prefer less challenging music, and now prefer more textural and tonally based music, rather than as many awkward notes in the shortest possible time. I guess I have matured. I still have all my old CDs and records, and do listen to them occasionally. I don’t like rap.

Which non-Australian wines do you like? Are there any wines you can’t stand to drink? I like Barolo, white Burgundy, Sancerre, reds from Priorat, Champagne and most other wines. There are many wine styles I don’t drink regularly, but none that I can’t stand to drink.

If you could be traveling somewhere else right now, where would you be? The northern hemisphere is cold at the moment, so I’ll skip wine regions, and have New York, because it is New York.

Is there a winery dog? We have four winery dogs at the moment. My winery dog is Poppy, the Irish Wolfhound. She has just turned 4. We do have a new addition to the winery dog list, Lucille, a 25-week-old Irish Wolfound. She is a redhead, and named after Lucille Ball. We also have Matilda the Border Collie, and Axel the Labrador.

Anything else you care to share? In my spare time I play one of my guitars, or work in my vineyard. 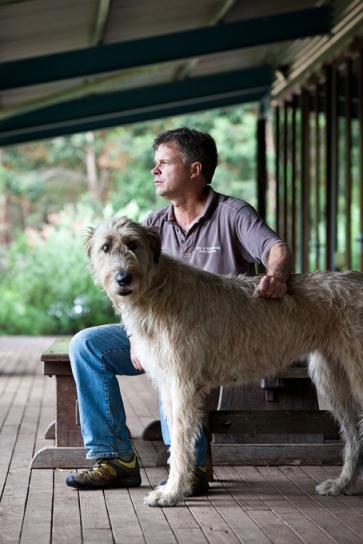