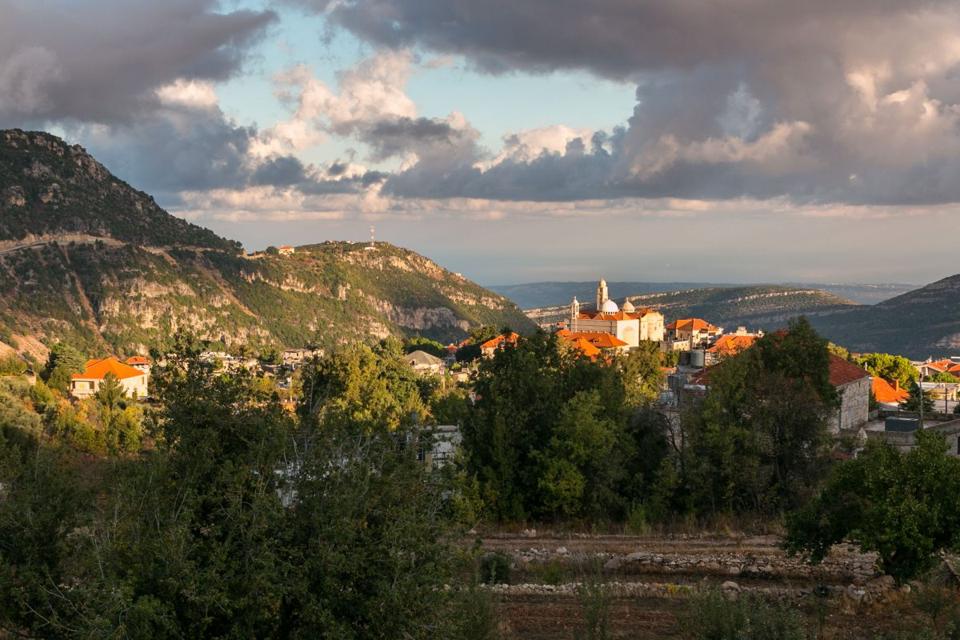 For an overview of the country’s history, please read Part 1.

As light from a rain-rinsed morning beamed through the kitchen’s floor-to-ceiling windows, I watched Jamal Shalhoub unfurl damp green packets. I’d heard this traditional dish, warak enab, or stuffed grape vine leaves, was one of the most tedious to make, requiring deft hand skills. She flattened the triangular points on to the table’s surface and placed a pinch of mixture – tomatoes, raw rice, and chopped herbs – in the center. Jamal folded the edges over the filling as if gift wrapping, then neatly rolled the bundle into a tiny cigar. “Now you try” her daughter said, translating a Lebanese dialect of Arabic into English.

I’d come to Lebanon to explore the wines of the country, but effusive praise for the cuisine led me to organize a cooking class prior to arrival. However, the importance of breaking bread was evident enough that anyone with an appetite would have figured it out. I’d discover that the wine and culinary scene of Lebanon boasted an outsize personality wholly out of proportion to its diminutive size, slightly smaller than Connecticut. (And what contribution has CT made to the food world besides New Haven pizza?)

The first night, our international group of Master of Wine students dined with local winemakers at Beirut’s upscale Lebanese hot spot Em Sherif. I’ve always maintained that to gain the strongest impression of a country’s heritage, look to its table; in Lebanon, that table runneth over. 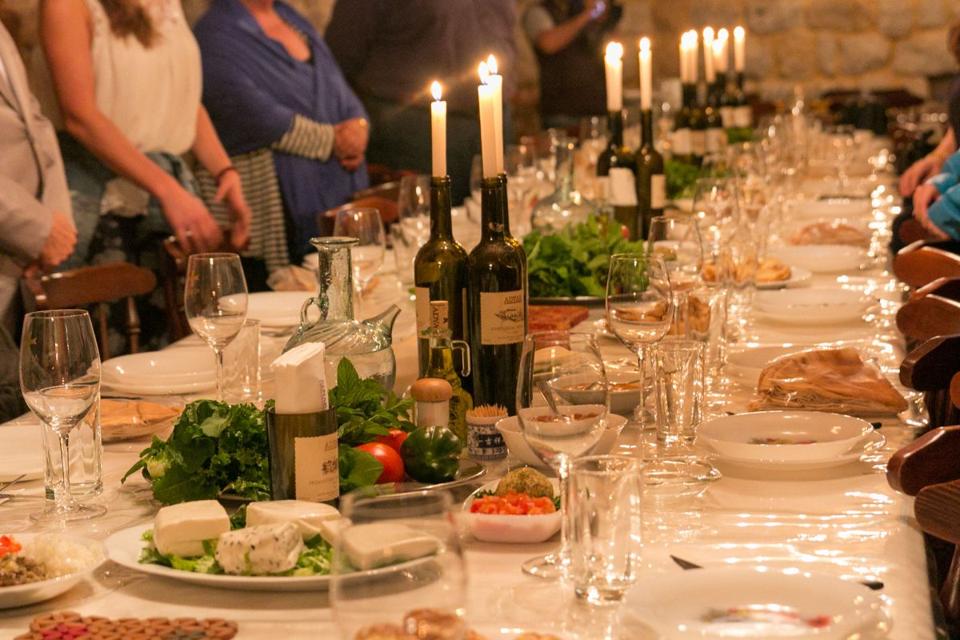 Dinner encompassed dozens of cold and hot mezzes (small dishes), grilled, baked, and roasted fish and meats including lamb and chicken kebabs and kafta (minced, seasoned meat), served with hot Arabic bread for scooping in lieu of a spoon. The sweet finale: bountiful plates of rosewater- and pistachio-flecked desserts served with café blanc (hot water spiked with orange blossom). The sommelier paired dishes with wines made from international varieties and local grapes grown and fermented within 100 miles of Beirut.

The following days would lead us into Batroun and the Bekaa Valley, the source of many of Lebanon’s best vineyard sites. Longstanding producers with large market share included Château Ksara and Château Kefraya. Their successes showed – each property had expansive grounds and wonderful restaurants serving classic and regional dishes. Ksara could even claim receipt of more annual visitors than The National Museum of Beirut. 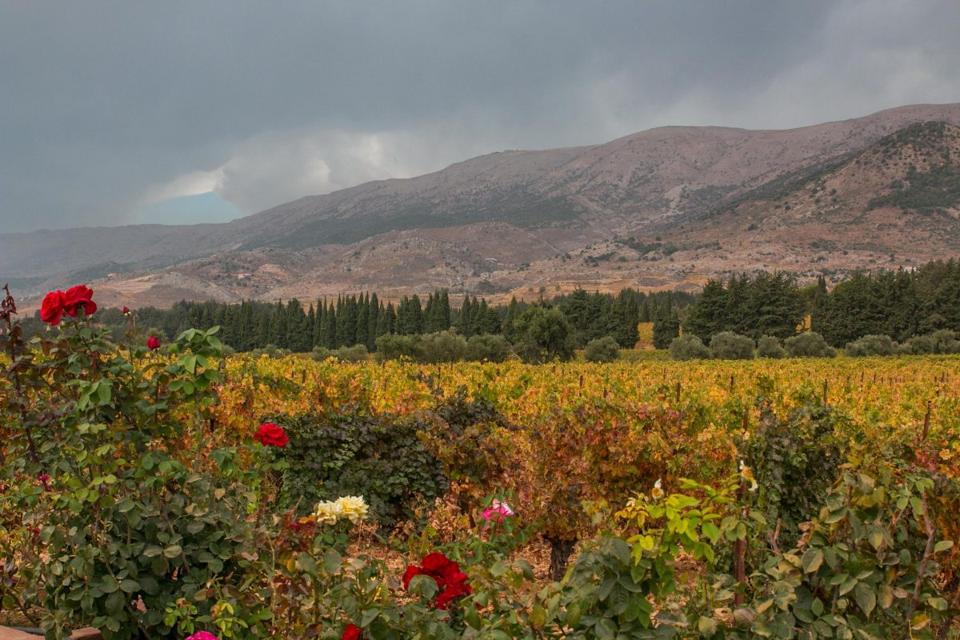 French influence extended beyond winery names to the grapes planted. Bordeaux varieties Cabernet Sauvignon, Cabernet Franc, and Merlot were common, as were southern French Mediterranean grapes like Syrah, Grenache, and Cinsault. Reds dominated, but whites have become more fashionable – and more sophisticated, many made from Viognier and Chardonnay. Lebanon’s most famous producer and the one best known in the States is Château Musar. While the Musar Red has long commanded the highest price in their portfolio, a tasting of Musar’s white from vintages back to the 70’s demonstrated the underappreciated potential of Lebanese indigenous grapes Obaideh and Merwah. 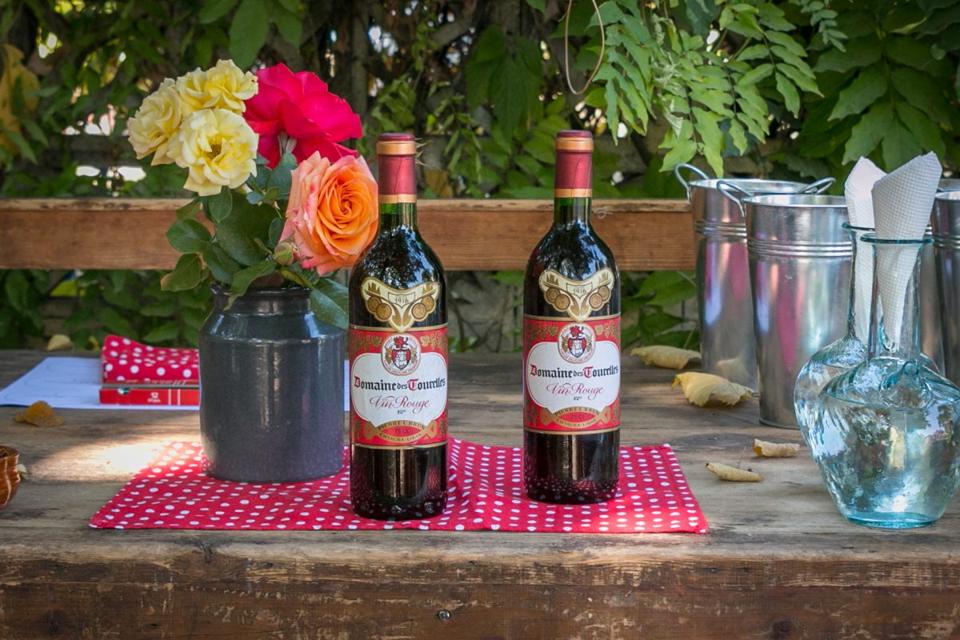 Also in the Bekaa, a young, forward-thinking team runs the country’s oldest winery, Domaine Des Tourelles. Founded in 1868 by French adventurer François-Eugène Brun, the estate was the first commercial cellar in Lebanon producing wines, arak and other spirits. Today, winemaker Faouzi Issa views old-vine plantings of Cinsault and other Mediterranean grapes as significant to the future of their wines, especially considering climate change – the growing season is getting hotter and drier. He has also organized the farming of premium anise for their house-distilled arak – a response to the loss of Syria as a provider of the world’s finest licorice-like herb.

Further into the Valley sat Domaine de Baal, a newish winery painstakingly carved from scratch out of the mountains. Terraced vineyards, farmed organically through backbreaking labor, encircled the property. The effort seemed to be paying off – de Baal produced one of the crispest, tangiest whites tasted on the trip, a blend of Chardonnay and Sauvignon Blanc.

From de Baal’s patio I could see shells of unfinished apartment buildings perched on the hills nearby. Why, I asked owner Sebastien Khoury, were so many of these structures scattered throughout the Bekaa? 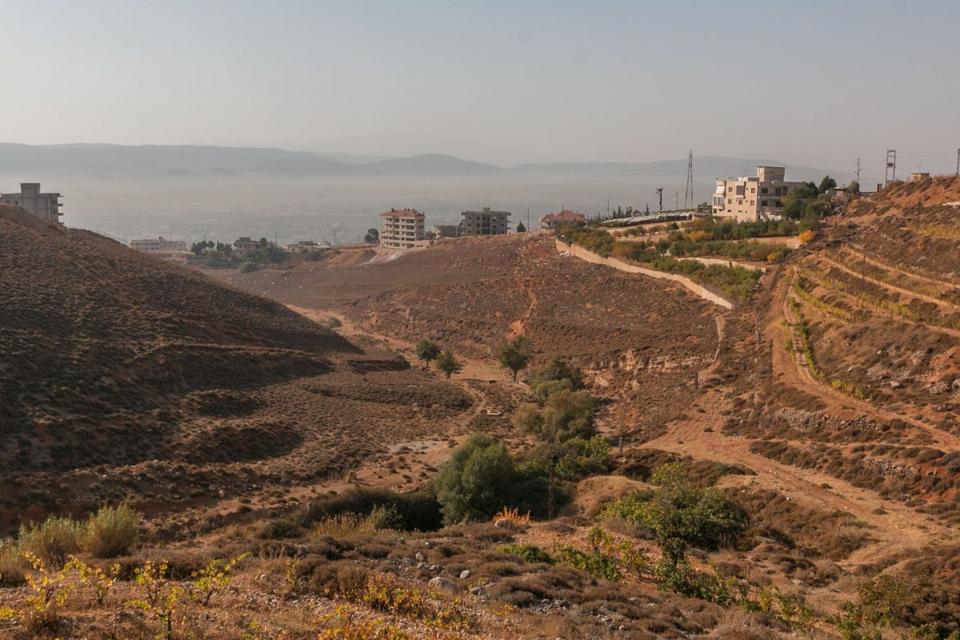 “The government is a ghost” he said. “There is no government. We’re going to end up a country full of houses, without farms. There are no restrictions on land use, no zoning laws, and everyone wants to build.” Land prices had shot up significantly as demand rose in a space-challenged country. Speculation over the spike in unfinished projects ran from corruption, to tax-avoidance, to developers running out of money.

Back towards the coast in Batroun, an area just north of Beirut, we visited another two young but promising projects. Both surprised with their sophisticated and polished style still reflective of terroir. Ixsir, set inside a renovated traditional stone house, poured savory, mineral-flecked Syrah-based blends from some of the highest vineyards in the country. Outside on the patio, under the shade of trees, we enjoyed a superb lunch: a mezze-filled heaven available to all visitors from their on-site kitchen. Not far away, producer Atibaia has focused on making one wine well: a Bordeaux-blend red. 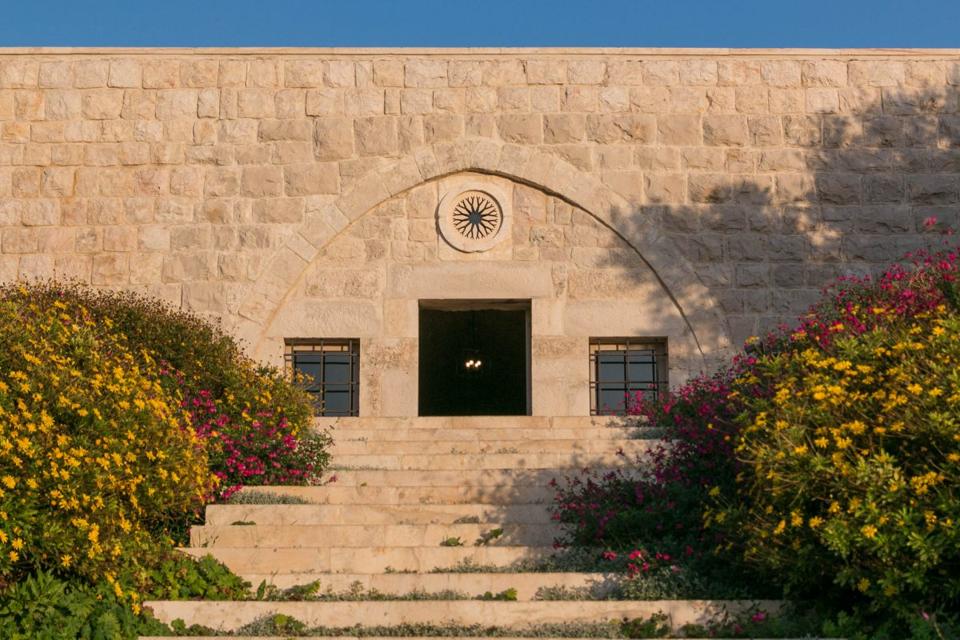 Throughout the course of our visits, I considered the dichotomy of Lebanon: the fragility of its existence balanced against the strength and persistence of its people, many who adhered to their values through times of strife. Serge Hochar, for example, helped build international recognition for Musar by sharing the story of his family’s commitment to winemaking and employment of staff through fifteen years of civil war. But they weren’t the only winery to have unbroken production.

As Laura Nakad of Château Nakad, explained, “we don’t invite war, but we’re used to it.” I understood what she meant, although it left me thinking long after she said it. Calluses helped us to survive but they could also inure us sufficiently from symptomatic pain to never seek remedy for the root cause. 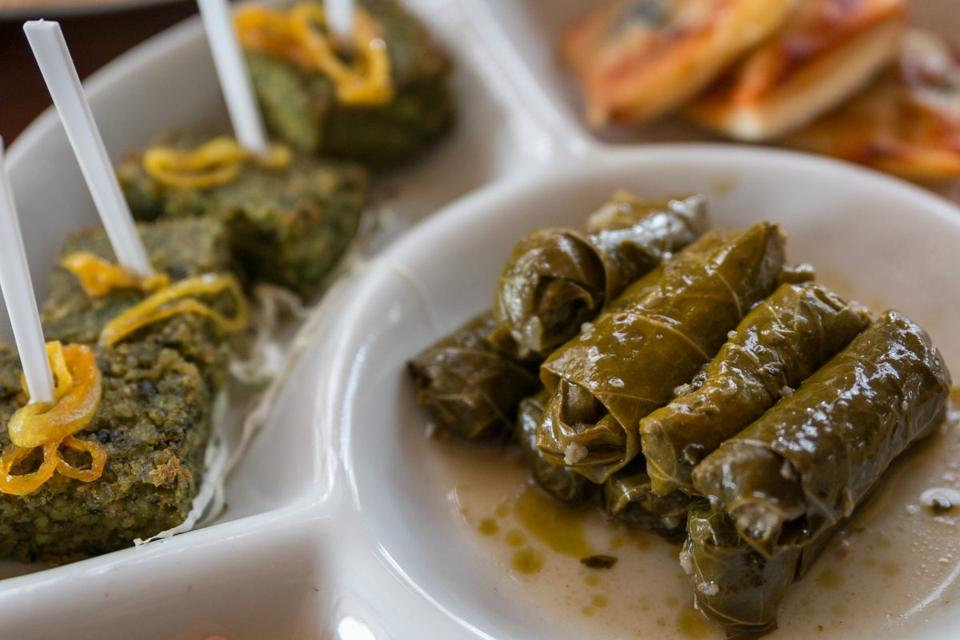 Finally, after several long days of driving between wineries, I took a break to linger over food in Beirut. I spent an afternoon grazing through the buffet at Tawlet. This ground-breaking restaurant from the team behind Souk el Tayeb (Beirut’s first farmers market), rotates female cooks from Lebanon’s hinterland into the kitchen each day for lunch. The guest chef prepares dishes from her region to share face-to-face with eager customers in the city. It’s a way of preserving provincial culinary nuance; laborious foods the younger generation claims to have no time to cook. It’s also proven integral to helping people heal, said Christine Codsi, partner to founder Kamal Mouzawak. “Women from different communities, different faiths, are putting the mindset of war and who they saw as enemies behind them to focus on cooking and friendship.”

Coincidentally, it was through Tawlet’s founder Mouzawak that I discovered the cooking class in the mountains. Mouzawak had renovated a beautiful centuries-old house into a B&B called Beit Douma in the well-preserved village of Douma. Jamal, who had shown how to gift wrap warak enab, was the mother of the inn’s property manager. 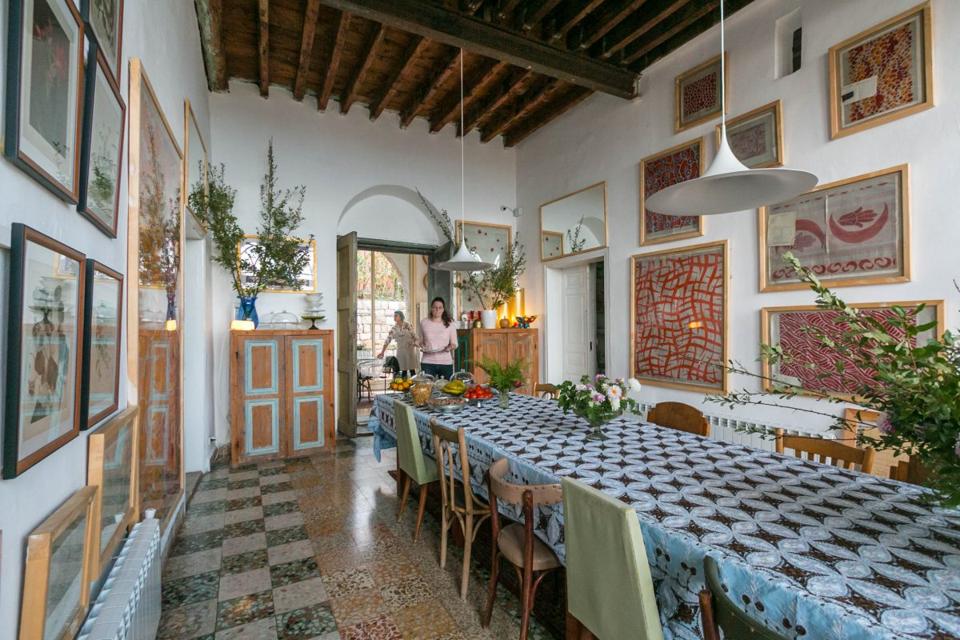 What I learned from Jamal’s class and my week in Beirut was that Lebanese food reflected the refinement of Western-European cooking while conveying the spices and flavors of the Middle East. The definition of a culinary crossroads. And the country was a paradise for vegetarians. Salads of fattoush and tabbouleh, fruits, whole grains, fresh cheeses, yogurt, vegetable dips – the hummus! – greens and legume stews, all woven with the flavors of olive oil, herbs, tahini, garlic, and lemon further testified to the brilliance of the Lebanese kitchen: its reliance on fresh ingredients. It would’ve been healthy if I could’ve stopped eating, but Lebanese hospitality considered the empty plate of a guest a veritable crime of etiquette.

While recent news – as in the resignation of the Prime Minister in the last 48-hours – may leave one questioning whether now is the time to visit, consider this: tourism, long an economic driver, has been depressed for years but the infrastructure is ready (as is Uber). As examined in Part 1 of this article, Beirut operates with kinks and quirks, but it runs. Today, especially during the off-season between fall and spring, the finest 4- and 5-star hotels, from high-end boutique Le Gray to luxury resort Kempinski Summerland, offer incredible rates. Especially as compared to other cities with a similar standard of fine dining, shopping, and nightlife. Visitors can easily make day trips to visit wineries in Batroun and Bekaa Valley, making Lebanon the greatest food and wine country – that’s waiting for people to visit. 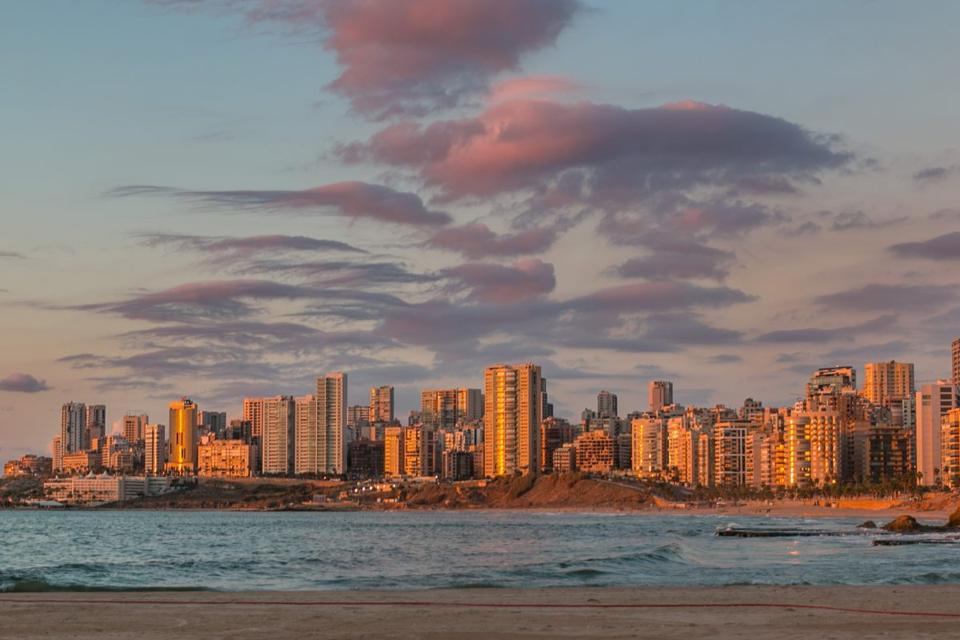