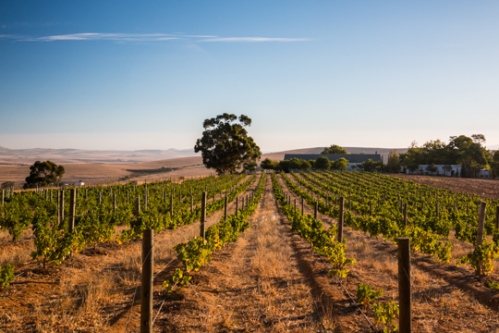 Mullineux Vineyards in Swartland. All images by Lauren Mowery

If you missed my Village Voice column Unscrewed…

Lurching forward, rocking back, the black Jeep fought for purchase on the jagged rocks and loose soil of the Paardeberg mountain slope. Perched on the edge of the leather seat, I grasped the roll bar above me to avoid swaying into my co-passenger’s lap. Four adults had squeezed into the barely three-person rear of the vehicle as rides into the eucalyptus forest, our destination that evening, were scarce.

The Jeep continued climbing parallel to a vineyard studded with waist-high, twisted, thick trunks. Old bush vines, clearly, given their knobby appearance and the vineyard owner’s penchant for working with them. We had alighted just above the A.A. Badenhorst Kalmoesfontein Farm, the site of the Badenhorst family’s annual harvest party, and the vintage had just concluded. As dusk descended, the Jeep’s driver, a harvest intern at the nearby Mullineux farm, snagged a shadowy spot cast by two towering trees. Getting out of the car, I was enveloped in glowing pinpoints of light. Dust particles suspended in the late summer air sparkled with the last of the waning sun’s luminosity, setting the tone for the dreamlike night ahead.

I found myself tagging along to the party after working a few weeks of the 2015 vintage in South Africa this February. The Paul Cluver winery in Elgin (a cool-climate region southeast of Cape Town) was my station, but after the stint concluded, I’d scurried northwest by two hours in time to catch the precious ride I’d sourced via email through stateside South African wine importer Pascal Schildt. Rumors about previous years’ antics — all-night alcohol-fueled debauchery — coupled with a few outsiders’ impressions of Swartland as an ego-driven, insular community, left me feeling vaguely like an interloper crashing the clandestine celebration of a wine-worshipping cult. Whatever I would find, my goal lay less in rallying with strangers in the inky darkness of the South African woods, than in seizing the opportunity to encounter a multitude of the region’s vinous visionaries in one spot, even if they’d likely be plastered.

While Swartland’s winemakers are not actual members of a cult, they do fervently profess to abide by a common ethos: to sustainably produce transparent, terroir-driven wines with natural ferments and indigenous yeast. And those wines have ignited a cult-like following, with Eben Sadie of Sadie Family Wine, as the early de facto leader, soon joined by cheeky, charismatic Adi Badenhorst. Sadie’s study in syrah and mourvedre, blended to produce his now-legendary Columella (first vintage in 2000), first galvanized interest and investment in the region.

Swartland begins around 35 miles north of Cape Town, along with a creeping shift in scenery and terrain. It’s a hot, dry place with low rainfall and poor soils like schist and granite, once known for bulk production; vines planted decades ago in a burst of experimentation were practically forgotten as the fine wine industry moved on to focus firmly on Bordeaux-style blends in Stellenbosch or Franschhoek. Driving through its wide dusty expanse dotted distantly with golden, wheat bearing hills and rocky outcroppings, Swartland reminded me of a frontier region left to the devices of pioneers and ranchers, and evoked the last untrammeled enclaves of rural California.

Thus, the apparent chasm between Swartland’s wine producers and those of the rest of the Western Cape is not defined by miles, but by their collective outlook and ability to see opportunity in the region’s uniquely challenging growing conditions. Plus, they are imbued with an anti-commercial spirit (although prove shrewd at branding and pricing, which may strike outsiders as philosophically incongruous, perhaps explaining a measure of Swartland-directed enmity). With land priced much more economically than elsewhere, a likeminded set of younger, intrepid winemakers decamped for it, many seeking to plant new vines while rescuing some of the country’s oldest fruit — e.g., chenin, grenache — from demise by cash-strapped farmers on the brink of ripping out the low-yielding plants. The wines’ styles are largely unaltered; for example, producers eschew robust new French oak treatment (which requires money anyway) in favor of natural, balanced expressions that articulate the secrets shared between dirt and vine.

Loire (chenin blanc, sauvignon blanc), Rhone (syrah, grenache, viognier), plus Spanish and Portuguese varieties as well as South Africa’s hallmark pinotage, exemplify the diversity of plantings. Blends, especially for whites like Andrea and Chris Mullineux’s fragrant and full-bodied clairette, chenin, and viognier, and single vineyard expressions, such as their granite-based syrah, are a focus of production.

Swartland’s self-described “revolution” (actualized by an annual party in November celebrating the people and their wines), has spurred newfound international attention on the country as a whole. A rising tide lifts all boats, helping to spotlight the growing ranks of cutting edge producers hailing from other areas like Hemel-en-Aarde, Bot River, Elgin, and even a few newer projects in Stellenbosch. There has never been a more exciting time for South African wine, especially for American drinkers who now have access to them.

As for the rest of that moonlit night in the eucalyptus forest, what happened in Swartland, will stay in Swartland, although a highlight I can comfortably reveal was the sunglass-donning, cherub boy fountain urinating gin for self-serve G&Ts. I also discovered an eclectic, cautiously hospitable group of winemakers (shock that a New Yorker had made it to their remote party was a recurring conversational theme), who had developed a fierce sense of community. To move there, farm, and make wine paradoxically strengthens one’s independence while fostering dependence on one’s neighbors; such an endeavor will inevitably cultivate strong bonds.

Here are ten South African producers to watch (all available in NYC):

Mullineux, Swartland. White Blend ’13, $30. Husband and wife team. She’s originally from California. All of their wines are fantastic, from the entry-level Kloof Street label, to their high-end soil studies through chenin and syrah. White blend is one of their richer wines at a lower price point. It’s redolent of flowers, apples, and hay. Broad but focused. (Importer: Kysela)

David, Swartland. Grenache ’14, $45. Rising star with the last name Sadie, but since he’s unrelated to Eben, he uses his first name to avoid confusion. Wines coming soon to the U.S. The grenache is earthy and dusty with plums, red fruits, and a hint of mint on the finish. (Pascal Schildt)

Other notable producers available in New York include Swartland icons A. A. Badenhorstand Sadie Family, plus Savage, Alheit Vineyards, and Radford Dale. Paul Cluver in Elgin makes beautiful pinot, chardonnay, and riesling, but is not yet available in our market.