Greek Wine, Santorini Edition: Why go, how to do it and what to drink (Assyrtiko!) 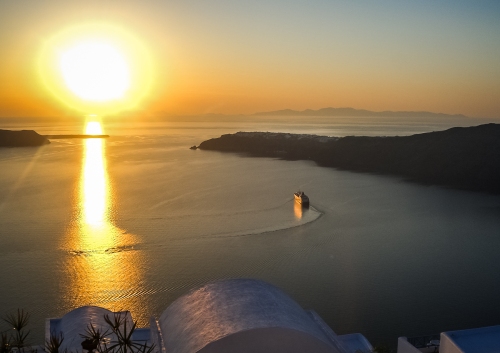 If you read my column Unscrewed last week, you know that I promoted the Greek varietal Moschofilero.  I think there is tremendous value in the Greek world of wine, once you know where to look.

The history of winemaking in Greece, some argue, extends back 6500 years to the Neolithic period; others claim the earliest hard data is a foot press (I would love to have one—I could type while my foot tap, tap, taps, pressing grapes!), discovered in a Minoan archaeological site on Crete, dated at 1600 B.C.  However, high-quality, modern wine production is nascent as compared to the rest of Europe.  Although I could go into a long explanation of the current debilitating factors in the Greek wine world that add up to value for YOU, the consumer, I will presume you didn’t come here for a history and economics lesson.  Instead, let’s explore Greek wines by starting with a place to which I have traveled recently, and with which most are familiar, but not because of their wine: Santorini.

After years of reading all the hoopla; seeing the striking infinity pool of the Perivolas Hotel grace the cover of every travel magazine at least twice, I bit the bullet and picked touristy Santorini as part of our Greek Cyclades escape, over less-visited islands such as Milos or Amorgos.  What I discovered, however, was a visually stunning place; the “Helen” of the Greek Isles.  But despite her dramatic beauty, that is as spectacular in person as every glossy marketing campaign has boasted, Santorini proved more than a gorgeous face; she offers vinous and culinary delights that many travelers don’t seem to know are just a few moped clicks away.

The Island of Santorini: Impressions and Rituals

A jumble of houses strewn along the cliffs

Santorini, also known as Thira (Thera or Theira– this gets confusing when booking hotels and flights), is a volcanic island. Her appearance today is the result of a massive eruption 3500 years ago which literally, blew her top off. This led to the collapse of the volcanic mouth into a caldera (aka crater) to be filled in by the sea, leaving a ring of cliffs upon which the villages are now built.  The resulting scenery draws thousands of tourists, but isn’t necessarily stable, as recent seismic tremors indicate.  This same volcano is blamed for destroying the Minoan civilization on Crete (the same ones who made the foot press!).

Our 5:15 am, 45-minute flight out of Athens touched down on the outer edge of the isle, just as the sun began to glow, slowly hoisting itself out of the eastern stretch of sea.  We would be staying on the caldera side, not far from bustling Fira town, the capital. After a short cab ride from the airport, we arrived at our hotel the Heliotopos, and were greeted with our first glimpse of the famous view, from our private balcony.

The azure expanse of sea stretched as though to another galaxy, silent and shimmering, only broken by the occasional boat skimming across its deep waters, ribbons traced across the placid surface.  Steep, stark cliffs stretched starward, nearly 1000 feet above the ocean, with apparently as much descending into the depths below.  As the rim curves, one can see specks of whitewashed villages, perched along the precipice; cubic homes built in jumbled stacks, as though rows of teeth in the mouth of a sleeping shark, swallowing the sea below.

During our four days on the island, we fell into an easy routine. Wine tasting during the day, followed by a sunset vigil on our balcony. Each evening we rambled down the hill to the nearest mart to collect fresh cheeses, local bread and cured meats before our evening celestial worship.  We supplemented our offerings with the very local rose (I think the shopkeeper made it at home) or one of the many Assyrtikos we had amassed during our circadian wine tastings.  Four days felt like one on Santorini, and after discovering there were multiple wineries producing high-quality vino strewn throughout the island, I quickly wished I had booked a week. 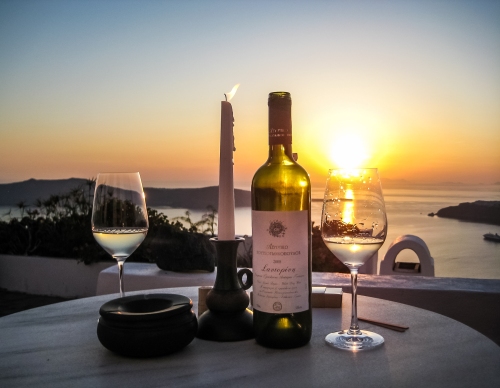 Evening ritual of Assyrtiko and Sunset

The Wine(s) of Santorini and Unusual Growing Conditions

Prior to my trip, I knew Greece produced wine, but I didn’t know Santorini was so prominent in its portfolio. The primary grape grown is Assyrtiko, often expounded as the finest white varietal from Greece.  Although that is not entirely true, one can claim Assyrtiko has had the most international exposure.

Known for producing dry wines (except for Vinsanto) with vivid acidity, excellent structure, moderate to high-alcohol and saturated flavors ranging from citrus, smoke, pepper and minerality, Assyrtiko flourishes in the volcanic soils of the island.  Flourish may be too strong a word, however, as the grape vines are trained to keep low to the ground in a basket shape, rather than on a traditional trellis, to protect against fierce winds and heat.  In fact, the grapes can only survive in this harsh environment due to the ingenuity of the original farmers who perfected this method of viticulture thousands of years ago. 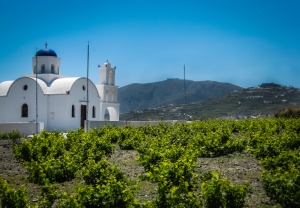 The wind, although harsh, does serve to keep pests and fungi away, allowing the vineyards to be farmed mostly, if not entirely, organically. The old vines are also phylloxera free—the pest can’t harbor in the volcanic soil.  Inside the vinous baskets each evening, moisture is trapped in the soil from the cooling fog, later providing a self-contained, mini-irrigation system to the plant.  A true collaboration between man and nature!

In addition to dry, white wine, Assyrtiko is used to produce a sweet wine called Vinsanto. The grapes are dried in the sun for two weeks then crushed, fermented and barrel aged for two years. The resulting wines show dried fruits, spice and minerality on the palate.

Other grapes grown on the island, such as Athiri and Aidani, play supporting roles—there is even an indigenous red—but Assyrtiko is the star of the show.

Many tourists hole up in their villas, stargazing or gazing at each other; others head to the beaches.  We were surprised to find the charming wineries and villages of the interior to be rather deserted, having them all to ourselves.  Why don’t tourists know about the other faces of this island goddess?  According to the wineries, an effort had only recently been made to put out a tourist-friendly wine map to encourage visitors to explore.  So now, I am encouraging you.

There are 12 wineries to check out on Santorini, easily visited with a moped or rental car; moped being more fun, but more dangerous. I recommend visiting them over the course of three or four days—make sure to check their schedules!  In between tastings, try out the various beaches and villages, plus the roadside stands selling capers, cherry tomatoes (buy the paste!!) and homemade retsina, while meandering leisurely around the island.  And don’t forget to be back on your balcony in time for sunset.   The wineries are:

Some have tasting rooms that are big and modern, but most are modest with friendly owners looking to connect with curious wine lovers.  Each has its own flavor, so try to catch them all!  Prices on the island range from $6-$15 a bottle—tremendous value for such well-made, interesting wines. Not all will be winners, of course—that is up to your palate.

Tasting Assyrtiko in the U.S.

If you can’t make it to Santorini anytime soon (I imagine quite a few  of you), inquire about Assyrtiko at your local shop, or better yet, check the online merchants almost guaranteed to carry a greater breadth of options at equal or better prices.  Generally, a good bottle should run between $12-$20, and the higher range is for the really good stuff. For instance, K&L Wine Merchants currently stocks the three well-known brands, relatively speaking, of Sigalas, Gaia and Argyros.

Tips to Improve Your Trip