The Subway Wine Trail: How to Wine Taste in Brooklyn

If you missed my column Unscrewed in the Village Voice on how to wine taste in Brooklyn, here is your second chance (with subway directions included)!

Can’t make it to Napa this week ’cause Jay-Z hitched a ride in your Gulfstream to his Barclays show? No worries, hit up Brooklyn, Hova’s favorite borough, for an idyllic afternoon on the subway wine trail. Your chariots, the 5/G/L trains (and the Ikea Ferry), let you have the drink without the drive — can you name another wine region that boasts a public transportation line?

Grab some friends and make a day of it.  Here is your guide for sampling the best wines this innovative borough has to offer, proving once again that Brooklyn can do anything, except maybe cultivate a vineyard. 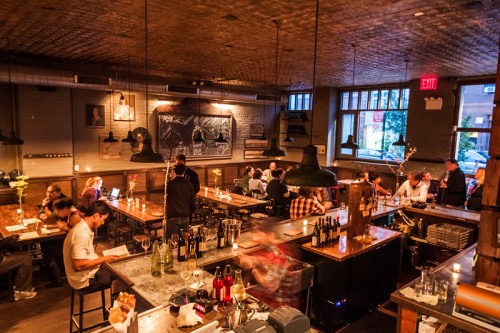 Brooklyn Winery – an easy walk from the L Train

Directions: Take the L train to the Bedford Ave Stop

Founded by two internet start-up colleagues and aspiring winemakers, Brian Leventhal and John Stire built Brooklyn Winery to fill a void in the market — the urban winemaking facility. They hired winemaker Conor McCormack to craft a handful of small-batch wines using grapes from upstate NY and Long Island (and from California for their Pinot Noir and Zinfandel Rosé). Current whites include Riesling and Chardonnay with several reds to be released in October. Wines are sold in bottles, as well as on tap using exchangeable growlers (they have a winery license). The space also serves as a restaurant, wine bar, and general hangout (wine and wifi), plus it can be rented for private parties. 213 North 8th Street, 347-763-1506

Directions: Take the L train to the Bedford Ave Stop

Founded in 2006 by winemaker Alie Shaper, BOE is focused on promoting all things New York, from the grapes used in her wines down to the local artists’ work featured on her labels. Although the wines are made at a shared facility in the North Fork, Alie plans to move more of the winemaking operation to Brooklyn as the business grows. The Williamsburg storefront opened in 2010 to showcase BOE wines and function as neighborhood wine bar that opens as early as 2 p.m. — for those days you wish you were at a tasting room instead of the office. You can also keep yourself busy sampling the other NY State tipples on offer: whisky, cider, and beer. BOE’s line-up includes a juicy Sauvignon Blanc, a newly released Rosé and several reds. Keep an eye out for fun events like the recent $1 “Oysters and Sauvignon Blanc” party. 209 Wythe Avenue, 718-599-1259

Take the Ikea Ferry round-trip. Shoppers will wonder why your mouth is purple.

Directions: Option 1: Take the G train to Carroll Street and get some exercise by hoofing the rest.  Option 2: Take the G train to Bergen Street or the 5 to Borough Hall; pick up the B61 bus to Red Hook, and get off at Van Brunt. Option 3 (from Manhattan only): Pick-up the Ikea Ferry from Pier 11 in lower Manhattan ($5 weekdays, free on weekends).

RHW is hard to reach, but your effort is rewarded with liquid gold. Set in an atmospheric old waterfront warehouse on Pier 41, arriving here feels like stumbling into a government secret, tucked away in a desolate building at the farthest edge of the city. Adding to this sense of discovery, one encounters an oddly located Key lime pie shop at the edge of the pier (Key West meets Sin City?). The staff is friendly and motivated to walk you through all of the 60+ white, orange (white wine with extended skin contact) and red wines produced.

That may sound like overkill, but there are two winemakers in the house. If you are familiar with Abe Schoener from Scholium Project in California, then you know you won’t be drinking standard issue 90 pointers. RHW is also blessed to have California wine genius Robert Foley working the second set of grapes. Each winemaker literally gets half of the harvest and a green light to produce their own style of Chardonnay, Cab Franc, etc. The collective goal is to show off the potential range of NY State wines while finding the common thread of terroir throughout. Pier 41, 175 – 204 Van Dyke Street, 347-689-2432