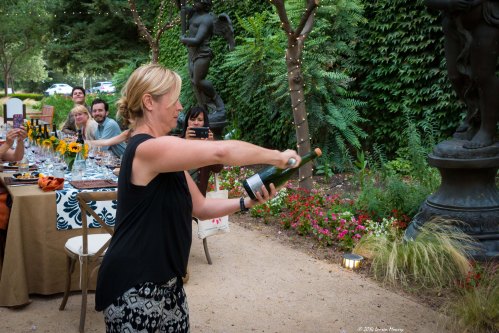 Looking for more bubbly wines to saber? Pet Nat! Try it with a meat cleaver.

Pet Nat is short for Pétillant Naturel, and refers to a rustic style of sparkling wine made in the Methode Ancestrale, a term that pretty much sums up the history of the technique: it’s old. Used centuries ago in Europe, the method was nearly abandoned with the advent of commercial yeast, refrigeration, and the pursuit of aesthetics, i.e., crystal clear wines. But modern winemakers with an experimental streak and natural winemaking tendencies have resurrected the practice, applying it to a range of varieties from Chardonnay to Gamay.

To make traditional method sparkling wine such as Champagne, a producer begins by bottling a base wine that has been fermented fully dry. To kick off a second fermentation in the bottle, sugar and yeast are added, and the formation of tiny, prized bubbles begins.  Once the yeast have finished working, the dead cells, or lees, are removed from the bottle through the process of riddling and disgorgement, after which a dosage (sugar and wine) may be added to sweeten it to the house style or winemaker’s taste, before closing again with cork and a wire cage.

Pet Nat, on the other hand, generally doesn’t utilize any additions to the wine, thus its appeal to natural winemakers. The fermentation of the wine starts in a tank with native yeast (as opposed to the addition of commercial yeast); before all the natural sugars have been converted into alcohol, however, the juice is transferred to a bottle to finish fermentation. The lees may be left inside rather than disgorged, so the resulting wines are softly fizzy, tend to be lower in alcohol, frequently have residual sugar, and if the spent yeast is left behind, cloudy.

Although the production method sounds rudimentary, Pet Nat is not the kind of wine a commercially-minded producer makes because results are too unpredictable for the mainstream market. Pet Nat’s become the darling of sommeliers looking for new things to saber and adventurous drinkers who find beauty, akin to a snowflake, in the variability that comes with each bottle.

To talk Pet Net, we tracked down owner of Vine Wine and founder of Pet Nat Week Talitha Whidbee (this year was its second season), to find out why she loves this style of sparkling and which producers really dazzle her palate.

How did you come to dedicate a week of tastings to Pet Nat?

I have always felt that Pet Nat is both underexposed and a much larger category than the consumer thinks.  By holding a weeklong tasting event, Vine is able to showcase all of the various styles that are made.  I also happen to be a fan of Bastille Day and what better way to celebrate that holiday than with low alcohol sparkling wine?

Who are some of your favorite producers and why?

Every year my list of favorite producers changes since there is such a difference in the wines from year to year.  Consistently I have found myself drinking Pascal Pibaleau’s La Perlette — this is probably the first Pet Nat I ever tried. Made from Gamay and Grolleau, this wine is earthy and full of wild strawberries, and the most delightful pink color.  Les Capriades is another favorite of mine, this year they have released a Pet-Sec which is almost all Chenin Blanc and is dry and focused with an almost salty quality that is sooooo refreshing this time of year. I am a huge fan of Pet Nat made from Ploussard and currently am enjoying the Noct’en Bulles from La Combe aux Reves: it is under 10% alcohol, has tons of bright fruit, and just enough funk to make it interesting.  Finally, I have to mention that for the first time in the history of Vine, we will have two Pet Nats from the Finger Lakes and a total of six from America.  When I started Pet Nat week, I don’t think we had one from America. It is really exciting to see more American winemakers making Pet Nat.

Why should consumers consider this alternative style of sparkling?

Aside from the obvious reason that it is always the right time to drink sparkling wine, the joy of Pet Nat is that you really get a chance to taste something that is made from passion to express the winemaker’s style.  Given how difficult it is to bottle, and the risk involved in making something as unstable as Pet Nat, it seems to me a great way to get to “know” a winemaker.  I think there is something also inherently joyous about drinking it, and since it comes in so many styles there really is one for every consumer.

Vincent Caille’s X Bulles
“100% Pet Nat Muscadet aka Melon de Bourgogne!
A delicious dry Pet Nat with the salinity you would expect from Muscadet and just a touch of yeast.” chasegranoff
Paolo Brunello’s Val di Spin
“I love this blend of Garganega, Glera and Pinella! It takes it’s name, Val di Spin, from the wild valley that the Garganega grows in. Naturally re-fermented “sur lie” in the bottle aka Pet Nat aka delicious!” chasegranoff
Uroš Rojac’s Royaz
“I had the pleasure of meeting the wild man Uroš recently. He is a whirlwind of energy and some of that ends up in this unfiltered, undisgorged, Zero S02 Pet Nat of Refosk and and bit of Syrah. Fresh strawberries and funk.” chasegranoff

2 responses to “It’s Natural, It’s Fizzy, It’s Pet Nat (not to be confused with Pet Gnats)”